You guys, it feels like yesterday when I was gushing over becoming a mom and its as if I blinked and she turned 3! 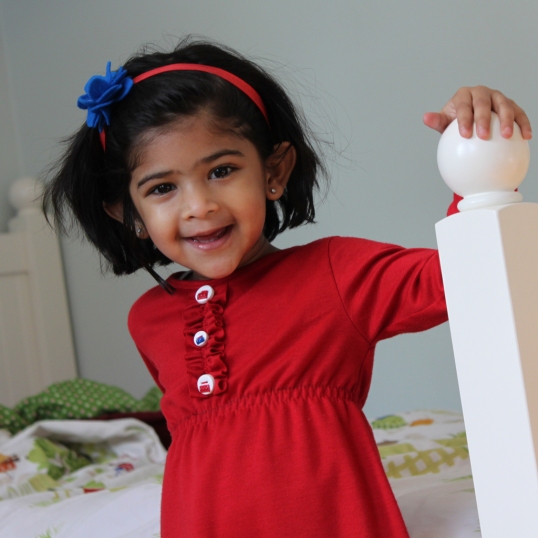 With 3 younger brothers growing up, I’ve planned my share of birthday parties but January in New England… Brrrr…  The party has to be indoors. We decided to host it in our basement. First things first, I had to come up with a theme. Not only are themes fun, it makes planning easier.  There is something you should know about me. I am a Pinterest junkie. And here’s another thing…. I love making and creating all sorts of things. Not just sewing. Since Dia is really into legos and they appeal to both boys and girls I decided to throw a lego party.  Upon research on Pinterest, I found tons of ideas. A month before the party, I started collecting them on my “secret” board on Pinterest and started making notes on what will and will not work. I only had limited time given that I work full time and take care of a 3 year old when I come back. But then again, she is my daughter, she loves to create too! So Mother and Daughter team got to work…

In this day and age when children have pretty much everything, how do you teach your children the value of money and things? You teach them to MAKE ’em. I want her to learn to enjoy the process of making and not just the end result. And she loved every minute of it. She was involved in every stage of this party. It was kind of cool actually. We started prepping for the party 2 weeks before the party so it gave us plenty of time. I’ll add the resources at the end of this post, so read on. 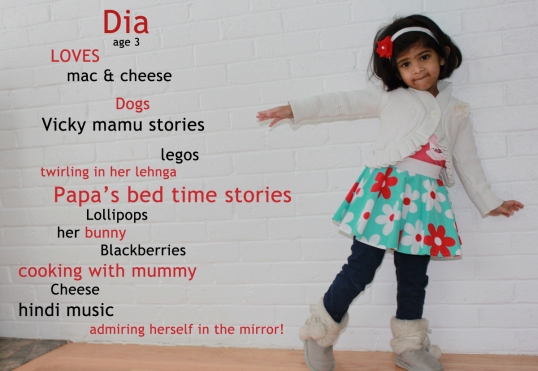 We made lego men chocolates in white and milk chocolates. Dia watched as I melted the chocolate and poured it carefully in the molds. This was super easy but each round only made 8 little men so we did a lot of rounds! I think we made about 60 lego men. I wanted to use them as cupcake toppers also. I bought the molds here.

We made lego crayons too. This was a little more involved. We soaked the crayons, took the paper off, broke them into small pieces (Dia helped with that) and placed them into the molds. Then we baked them in a 250 degree oven for 20 minutes or so. A quick rest in the refrigerator and they were perfect! 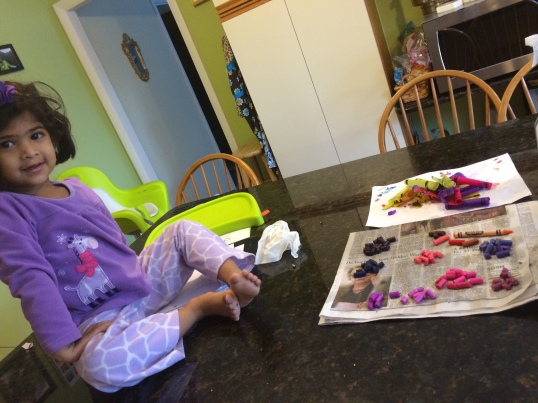 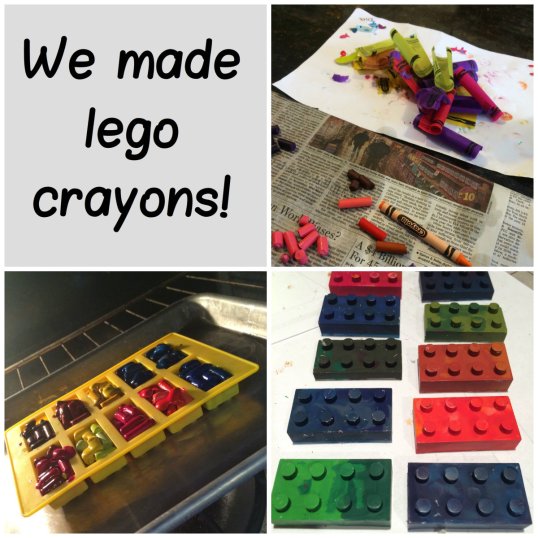 I didn’t take photos but I made barrettes for girls. I bought “Bricks and more” Legos from Amazon.com and used some of the pieces for decorations (to follow) and used the square legos for the barrettes, Super simple, just hot glued them on carefully. Speaking of bricks, how cute are these! I got the ideas of these boxes from deliacreates.com Actually a lot of the ideas for this party came from her blog. Thanks Delia! These did take a while to make but that’s what evenings were for. So fun. For boys, I ended up buying minifigures. I couldn’t figure out what to make,, so I gave in..

I bought this banner PDF from Etsy, printed it and hot glued it to baker’s twine.  Gagan wrote DIA on lego plate. Cute right!

I set the table the night before the party. Juice boxes were wrapped in lego printables and I added lego men stickers on the plates. Dia filled a couple mason jars with legos and we used them as balloon weights. 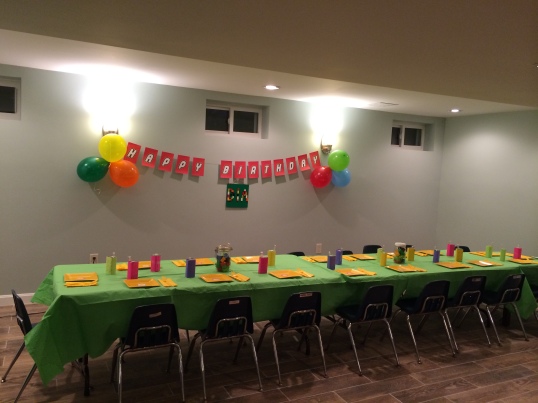 Lego (actually mega blox) utensil holder. This one was a favorite with adults 🙂

We even had lego soap. Hey, the kids need to wash their hands and what’s more fun then lego soap. The moms got a kick out of it too. And of course, Miss Dia helped with this too. She filled the soap dispenser with legos.

I didn’t do paper invites but I did make thank you cards. I simply took a photo of a girl Lego on top of a base plate. Added a speech bubble in Photoshop  and got them printed at Costco as a 4X6 photo. Wrote the note on the back of the photo. Cute ha! Not my idea again. Delia rocks! 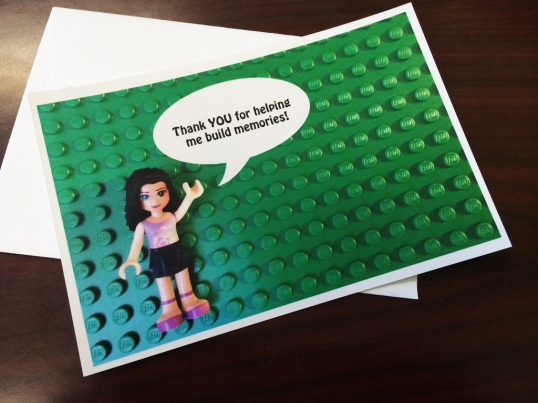 I kept it very kid friendly, I made mac n cheese in muffin cups for kid sized portions. I used the fun wheel shaped pasta and the kids loved it. We also had a few snacks like veggie straws, hummus, chips, cheese and fruit skewers (another favorite). Gagan made the skewers. They were a huge hit. Put anything on a stick and they’ll eat. We also ordered pizza and asked them to slice two of the pies into 16 slices instead of 8. Adults had coffee, pizza and salad.

We also made graham cracker legos.  I put frosting on the crackers and Dia decorated them with M&Ms. She made all of these!

And then there were the cupcakes! I made 48 chocolate cupcakes using my go-to recipe from cooks illustrated. Yup, I don’t think I will be eating cupcakes for a long time. But the kids ate them and we had like 4 left over! I tried to color the buttercream frosting red and blue but it was pink and sky blue. Does anyone know how to get deep red color from food coloring? 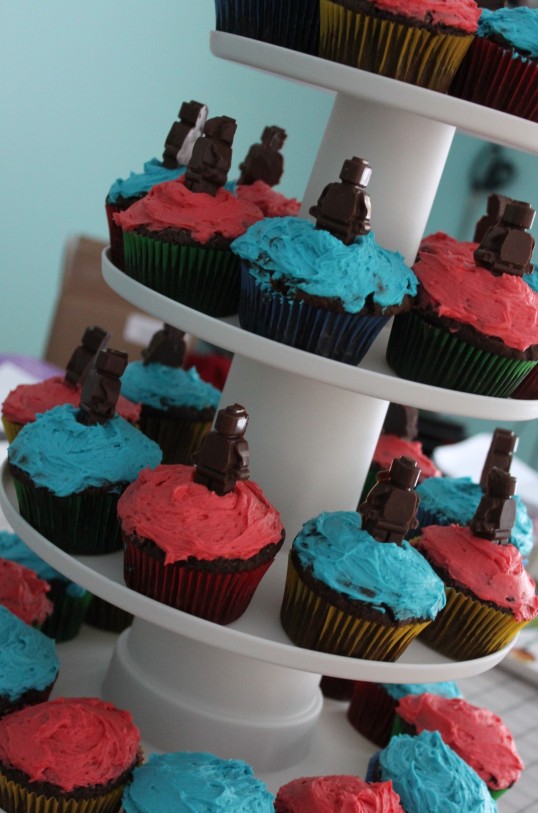 Don’t they all look cute?

It was hard to come up with games which would appeal to 3 year olds so I created “stations”. We had a lego building station. I put dia’s foam mats down and put some of our legos and other games so children could play on the floor.

I also put a small coloring station where I put a big box of crayons and lego coloring pages. That table got a lot of attention!

Pin the head on the lego man. I thought of this last minute and once again, Pinterest to rescue. I found a template here. I already had the cardstock from the boxes, all I needed was foam core and we were ready!

Finally on the day of the party, my friend got the kids to play musical chairs. It was hilarious. They obviously did not follow any rules and kept running around the chairs. Hey, at least it got them moving. And it brought back some fun childhood memories.

And last but not the least, I made Dia’s dress. As I always do on her birthday. I wanted to tie in the lego theme and red looks good on her. I bought these handmade buttons on etsy. The seller was so sweet. When I told her it was for my daughter’s birthday dress, she rushed them to me.  I will totally buy from her again. Since I wanted the buttons to be the focus, I selected a solid fabric and added a ruffle to showcase the ruffles. I’ve written a full review on PatternReview.

I also made a felt flower headband and added a tiny white lego piece, just because!!! Yup I’m crazy that way.

My favorite moment from the party? When she was blowing out the candle and everybody was singing happy birthday to you, Dia was smiling from ear to ear. Totally loved the attention. Another one.. when I was frosting the cupcakes that morning, she came to me, kissed me on my cheek and said “I love you Mama”. AWWWW I love you too Munchkin. Happy Birthday Sweetheart! Now that the party is over, I am a little sad… Valentines anyone??? 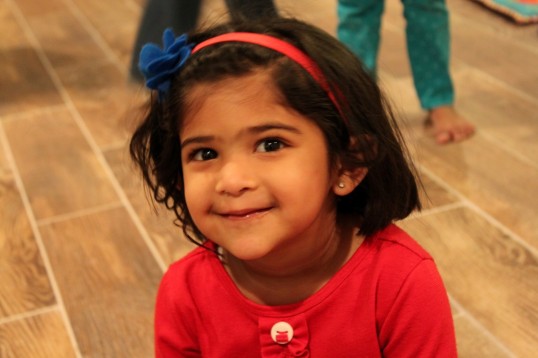