Cutting up a storm

You’ve heard of “Sewing up a storm”. I am not sewing! I am cutting. Yup, that’s right, a cut-a-thon. For some reason I am enjoying the prep work more tracing, cutting, feeling the fabric more than the actual sewing. Look, I’ve filled up this whole bin.

I am not going to set myself any sewing goals this year but I am trying to sew more to fill the holes in my wardrobe. The problem is, they are all TNT patterns so while they are quick and easy to sew, I miss a challenge every now and then. I had a little one last night though. I had a yard of this really yummy bamboo knit I had bought years ago at Vogue fabrics in Chicago but never got around to using it.So I pulled it out and got to work. I decided to make this top. Kwik Sew 3032

Man that is an old picture! ok, moving on.. So as I was cutting I realized I am not going to have enough fabric for the cowl. Are you kiddin’ me? That’s the most important element of this top. So I decided to “Make it work”. I come from a family of frugal women who have always created wonderful things within their means so I closed my eyes and thought of them.

The problem with the cowl was that it was too wide and it’s cut on the fold and I needed two of these! I didn’t want a seam down the center front so I re-drafted the pattern to take some of the drape off so it would fit on my left over fabric. You can see in the photo below, the original cowl pattern is under the sheet. I took off about an inch, but marked another line in case even that won’t fit. 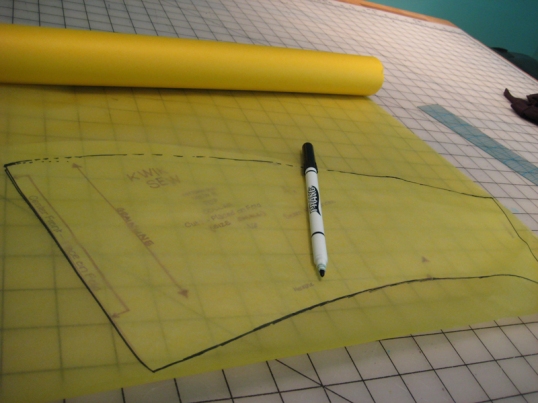 Moving on to the next piece. I could just make this a one piece cowl since my fabric is the same on both sides but I decided to cut the other piece on the fold.  Since it will be technically the facing, the center seam won’t show.

Problem solved! It may be a simple change but it allowed me to use the pattern I wanted in the fabric I wanted. The sewing… well that’ll take care of itself later on whenever I have time. Now what can I cut next 😉 ?

Posted in Uncategorized and tagged sewing

2 thoughts on “Cutting up a storm”